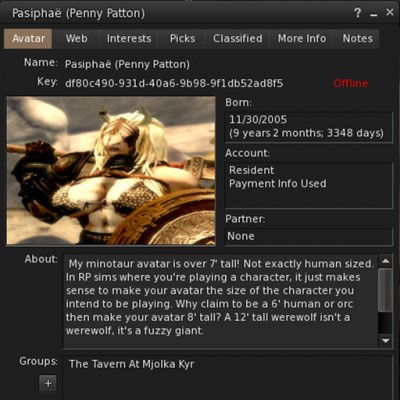 Blogs are reinventing everything! One great example is the way they’ve documented, discussed, and enhanced the experience of virtual worlds. Of all the truly insightful bloggers I’ve read, none has had deeper and more fundamental insights into what works and what doesn’t, and how to fix it than Penny Patton. In 4 years Penny Patton has only written 44 posts, but they’re 44 of the most important posts I’ve read. If there’s an easy way to see and access all of her topics, I haven’t found it. So I thought I’d use my blog to create a handy index of all the insights on Penny Patton’s blog. I’m positive it will be a great resource for me, and perhaps it will be for you as well.

Posts on Penny Patton’s blog, pennycow.blogspot.com, in reverse chron order, from 2014 back to 2011:

The Cost of Land vs The Perception of Value

Since I first joined SL in 2005, right up to today, one of the most common complaints I’ve heard from SL users is that land is too expensive in Second Life. My position is simply that land is not as expensive as people realize because pretty much nobody is enjoying the full value of the land they’re paying for and I see this as a much bigger issue than the actual cost of land. All my usual points about building to scale stand, especially in the age of mesh.

We all have our complaints about SL. The lag. The lack of visual fidelity. Poor framerates. The unreliable scripts. The lag. The expensive land. The lag!

I’m sorry to say there is no “silver bullet” to solve these problems. There is no single problem LL can fix that will magic the lag away. However, there are little things you can do to alleviate these issues somewhat. They add up, so the more people who follow these tips, the better SL looks and runs for everyone. 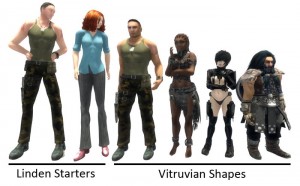 Mesh is filling SL, which is great! I’ve recently redone Milk & Cream using as much mesh as possible and already people are telling me how great their framerates are despite the detail and sheer amount of content around the island!

However… Mesh content creators are building at the same sizes as they did with sculpts and prims prior to the introduction of mesh… You have to remember, mesh content gains Land Impact cost the larger you make it. I’ve literally cut the LI cost of mesh buildings in half by shrinking them down to a realistic size as opposed to the size the creator sold them at.

A Critical Look At Second Life

Why Linden Lab needs to present a more impressive image of Second Life and how they can achieve that.

How to make a good avatar shape with proper proportions. This article is a short guide to making a decent SL avatar shape! Previously I’d written a much longer version which included a brief explanation of human proportions as understood by artists as well as a guide to the SL appearance editor.

Last year I wrote a lengthy article explaining why camera placement matters in virtual environments, how the SL camera works and, finally, how to improve the SL camera yourself by adjusting some debug settings. By popular demand, here is an excerpt with just the part about how to improve your SL camera!

Alison Alena made some small tweaks to the SL avatar mesh that improve the geometry without affecting your ability to use SL avatar content. What’s this mean? A more natural looking body shape that isn’t nearly so distorted by poses and animations, and you can make this improvement yourself without affecting your ability to use standard SL avatar content like skin and clothing textures. Particularly it reduces the unnatural mid-torso “fold” and the way your butt and legs distort when animated or posed.

Simply download the ZIP file attachment to the above Jira and install the files in the appropriate SL viewer directory. Kim Link’s comment explains how, at least for Windows users like myself.

When I talk about proportions in Second Life, particularly proportion mishaps that are common in SL, a oft repeated rebuttal I see is “In Second Life we can be whatever we want, so why do you want everyone to look like their real world self?”

Recently someone said to me that most people find normal human proportions”ugly” and that they’d rather look like a J. Scott Campbell illustration. The thing is, Mr. Campbell understands human proportion and uses that understanding to craft attractive figures.

I saw today that the August Update from Linden Lab included the introduction of new starter avatars. Given how impressed I’ve been with the progress LL has been making lately, you can imagine my disappointment upon taking a closer look at these new starters.

A Matter of Proportion

It is impossible not to think of the avatar when you think of Second Life. The avatar is the very face of the virtual world and the basis around which all content in Second Life is created. Despite this, the avatar creation process is probably the least understood aspect of content creation in Second Life.

Vitruvian Shapes – The Hero and the Amazon

The Island of Milk & Cream

One of the things I do in Second Life is design environments. Basically level design and modeling for a great big social sandbox. It can be a bigger challenge than videogame levels since you’re not designing around goals, and there’s so much more you need to take into account due to the sheer amount of freedom SL allows in avatar sizes, camera placement and even interface. Not to mention the lack of base tools and settings to allow for more universal concepts such as scale, which videogames take as a given.

A Brief Thought About Script Memory

I have seen a growing number of people in Second Life lately claiming that excessive script memory use does not create lag… It makes sense, and yet experience tells me it’s not entirely true.

A Matter of Perspective

The importance of camera placement in virtual environments.

The video game industry spent a decade learning important lessons about how camera placement impacts our interaction with, and enjoyment of, virtual worlds — lessons Linden Lab cannot afford to ignore.

This article is intended to illustrate the effects of camera placement on our engagement to, our ability to navigate and our freedom to create content within virtual worlds such as Second Life. I touched on much of this in “A Matter of Scale”, but wanted to expand on the specific issues of camera placement in SL beyond the impact on scale, as well as explain how the camera placement settings in Second Life actually work.

In A Matter of Perspective Penny Patton shows us the power of Default Camera Settings and how to use the SL Debug Settings to change them to a much better experience. Coincidentally, just this week, the Firestorm team released a video showing some cool Keyboard & Mouse shortcuts for moving your default camera position around. Thanks Firestorm Team!! Thanks Penny Patton!!

A Matter of Scale

This article is intended an informative post about the practical and aesthetic implications of scale for content creators in SL. It is not a judgement against large avatars, only an objective assessment of the affects of scale on SL and how both content creators and Linden Lab would benefit from encouraging the trend towards properly scaled avatars.

I have a blog.

Not entirely sure what I’ll do with it, but expect it to mostly be about the horribly named, horrendously marketed, yet surprisingly fun virtual sandbox known as Second Life.

“Eww, Second Life? More like “No Life” am i rite? Isn’t that that ugly videogame where people go for pixel sex?”

Yes, that’s the one! But, despite the hideous starter avatars and awful environments new users get tossed into, Second Life is actually capable of some pretty impressive graphics.

If I come close to my 2015 pledge to do a new post every M-F, then I’ll equal the number of posts Penny Patton’s done in 4 years, in about 2 months. But IDK if I, or any of the wonderful bloggers I read, will ever pack as much power and insight into “just 44 posts” as Penny Patton has done these past 4 years.

In my recent rethinking of The Blogosphere, I’ve become eager to try more frequent and more regular posting. I’m happy about it. Still, Penny Patton’s spare, impactful writing, is a real reminder of how many different ways you can accomplish something with the tools of our time.