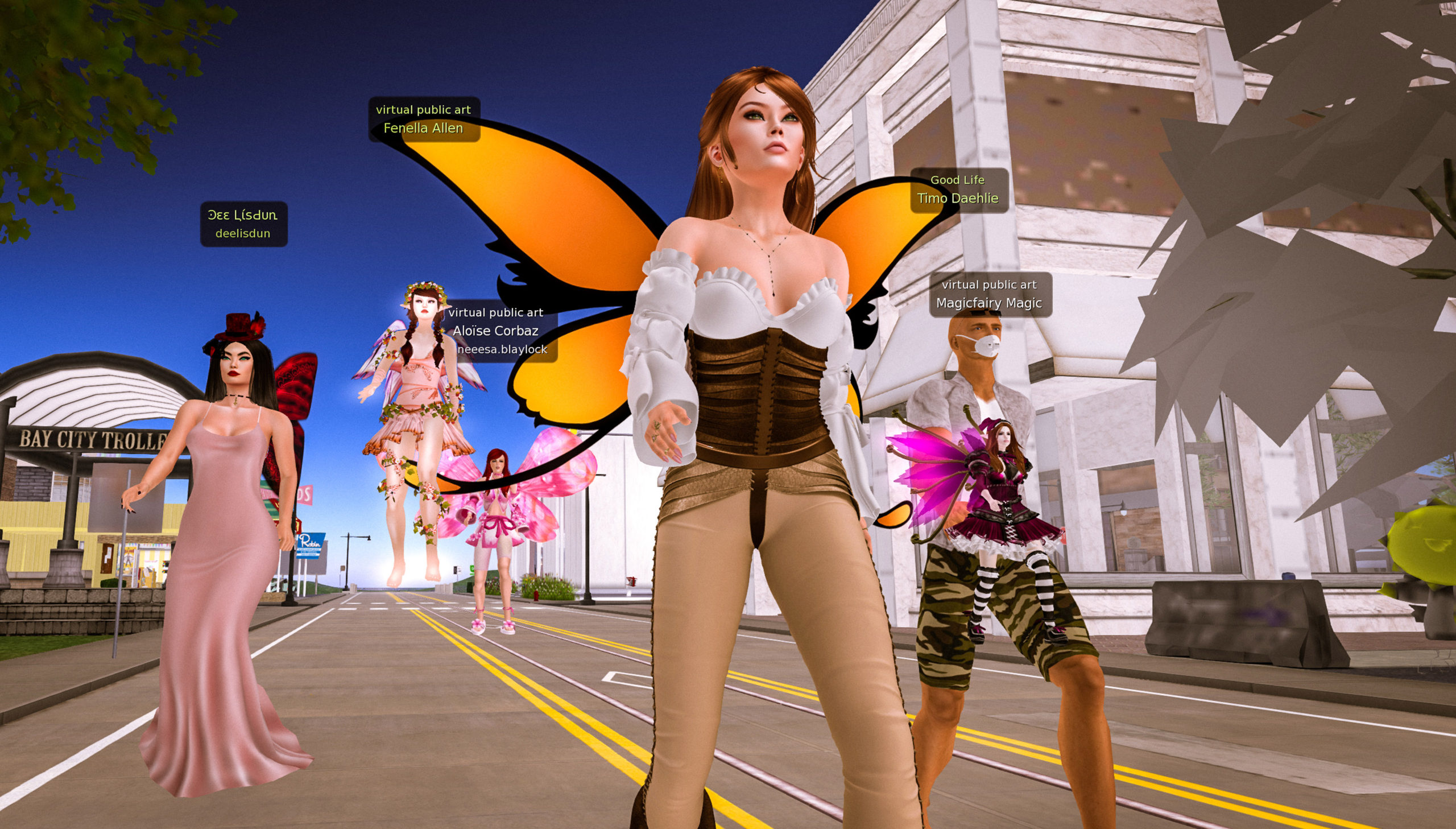 All avatars are welcome at all parades. You do not need to wear an avatar of the specific type being celebrated that day. However, if you are so inclined, you might like to join us in a Tiny, Faerie, Furry, Differently-Abled, Child, or Animal avatar. Parents & guardians (of any species) are encouraged to join your children in the Child Avatar Pride Parade.

I should note that none of the identities being celebrated this month represent my own day-to-day identity here in SL. I organize these parades not as any sort of insider or leader, but as an interested outsider eager to learn more and expand cross-cultural experiences in our world.

Longer answer: This world of ours was magical before COVID-19 ever appeared. Now that it has, what virtuality affords stands in contrast to the pandemic isolation of RL. We can walk shoulder-to-shoulder with avatars who might live in our same physical city, or on the other side of the globe. In this world we can build community with people not because they share our DNA or Postal Code, but because they share our hopes and dreams of a better world.

It is easier for a differently abled person to order food delivery to their apartment than it is to face the streets of a city that wasn’t built for, for example, a wheelchair. But invisible people never have civil rights. Although they are “rights,” civil rights must still be earned. Civil Rights are earned by standing up and being counted in the light of day. I believe that the Pride Parade is the most fundamental tool of civil rights.

From Hitler’s hatred of Jews and Gays, to Trump’s hatred of Muslims, demagogues have always sought to divide us by exploiting our differences. Yet, in our finer moments, we know that we are stronger together. We are more creative, more innovative, more problem solving, and more powerful, together. “Together” need not mean some sort of amorphous androgyny, it can and should mean, as Mr. Spock liked to say, in our “infinite diversity”.

In RL the diversity of humankind takes many forms. In SL the options for expressing identity grow even larger. This October we take some time to celebrate a few of the many ways of being in this world.

An awful lot of us in SL have human avatars. Also, some are furry, tiny, faerie, animal and more. One thing all these avatars have in common is that they are pixel representations of more-or-less RL carbon-based life. You don’t see many silicon-based avatars!

Yet our world itself, and other worlds like Fortnite, Minecraft, and even the world’s largest MMORPG, Facebook, are not carbon-based worlds, they are silicon-based worlds.

Are we being chauvinists? Substratists?

In a world where your avatar can be anything, why do we hew to carbon-based lifeforms? In design, skeuomorphism is making something look like it’s RL analog. So early computer desktops often depicted leather desk blotters and early calendars and organizers might have had graphics that featured a spiral binding on the left side to suggest the familiar to the new digital traveler. Over time, we gained familiarity with the new and let go of skeuomorphic references to the old.

In SL I don’t personally like homes with roofs, so I live in an open-air lighthouse. Instead of a building like all the other SL hair salons, the old Analog Dog shop was a beach. You stood ankle deep in water as you looked at hair styles. IRL a roof protects you and your belongings from sun, rain, and vandalism. But in SL these are not issues. So why isolate yourself from the glory of the heavens with a dull, wooden roof? IMHO ban lines and ejector orbs are the same. Where’s the danger? What’s the potential harm? It’s so frustrating when I try to sail the rivers near my parcel in Innu and constantly hit up against ban lines and ejectors. What are they protecting? An RL sense of property?

In our world, changing, for example, your ears, from default, to pointed faerie ears to gauges, is as easy as changing your shirt is IRL. Should we hew to the RL standard that ears don’t change that much? Or revel in the SL freedom that they can? If I’m an obese, elderly, white male on Monday, should I be an anorexic, teen, black female on Tuesday? Our world easily affords that flexibility. Or is that much change alienating for your perception of me as a unique individual? Does my identity begin to disassociate? Deconstruct? Where is identity located? What do you need to feel the sense of a constant Vanessa? What do I need to feel the sense of a constant you? Why do I have a name that is gendered female when I could simply be “Seven of Nine” or something?

And why, in a world where you can easily be an Alpaca, a 1968 Ford Mustang, or the Planet Saturn, do we walk around in avatars that look like human beings? Why isn’t my avatar a Ryzen 9 or a Core i9?

“Oh, I’m going to a meeting at the NonProfit Commons sim this afternoon, so I think I’ll wear business casual. Then later I’m going dancing at Muddy’s, so I’m wearing a bra and fishnets.”

Why is it that? And not

“For the NPC meeting my Ryzen 9 will wear low-profile air cooling, then later, for dancing at Muddy’s, I’ll wear liquid cooling with a big radiator and lots of RGB”?

Is it anthropomorphism? Do we prefer avatar bodies that we can more easily project human qualities, emotions, and intentions onto? Robots with legs are easier to anthropomorphize than robots without legs? Which in turn are easier than an AI emanating from a bodiless datacenter?

MARCH OF THE MACHINES

This week’s parade, March of the Machines (Carbon Avatar Pride Parade) isn’t likely to answer all, or any, of these questions. But it’s a nice day to think about them. And a nice day (I predict clear skies) to march down the street as Core i9’s, prosthetic legs, Robot drill heads, Cardboard Boxbots, Skynet, Commander Data, HAL 9000, and whatever else inspires you!

If you search on SL Marketplace for “Machine Avatar”, “Computer Avatar” and “Monitor Head” you’ll find a variety of choices.

is the classic “Cardboard Boxbot” avatar.

Or, you can simply take off all your clothes, apply an alpha mask to hide your SL System Body, and attach a Borg Cube or whatever else you might like to attach to your invisible-but-ever-present skeleton. There’s a full body alpha mask also in your Library: