I’m reading Jane Jacobs’ 1961 masterpiece The Death and Life of Great American Cities. She’s been giving a lot of examples of ways cities work, and don’t work, and how the conventional wisdom is often wrong and based on as much myth as bloodletting. 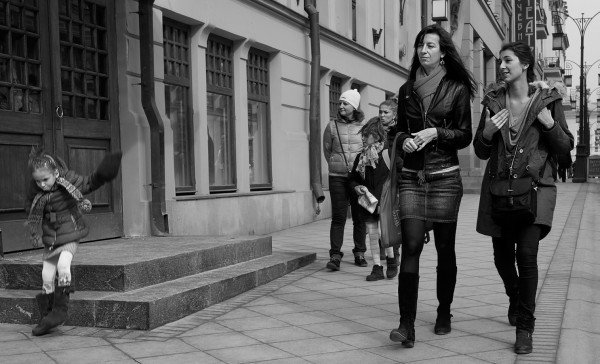 Spontaneous Ballet of the Street

What I’ve been struck by as she describes the spontaneous ballet of the street, is how much her thriving city sounds like Wikipedia! When she describes the threat and promise of strangers, the eyes of the city being on the street, not because they have to, like paid law enforcement or city monitors, but because they love to, like engaged residents, or flâneurs, it seems so much like the structure of Wikipedia.

Great communities as they are, I don’t think large Open Source projects like WordPress or GNU/Linux have quite this quality. I’m sure “strangers” do enter and leave those “cities” too. But Wikipedia with it’s zillion participants, and engaged community, just sounds so much like Jane Jacobs thriving city.

Proprietary places like Facebook aren’t that city either. For sure those places can be home to great activity! But Jane Jacobs protests against “planned utopias”. Her ballet stumbles when faced with the rigidity of a divine planner’s vision. The life of the street seems to grow bottom-up, not top-down. We see this very effect in Facebook problems like the Nymwars.

Facebook and it’s peers are planned communities. Many people find value there. But they are not living cities in the robust Jane Jacobs sense. They may be great places to view predictable, and cherished, baby photos from your relatives. But platforms like Facebook will never have the spontaneous ballet of the street the way Wikipedia does.

By now Wikipedia is a mature space. I doubt anyone can come in new and sweep through with metachanges. The community would probably resist that. But you can open a new shop, or add a new entry, and add your voice to the fabric of that virtual city. Like real cities, Wikipedia may have governance and even official law enforcement, but they can never be as important as the eyes of the residents on the street. Not because they’re required to be, but because they enjoy being.

How does your Group Blog, or Social Network, or Virtual World achieve the vibrance and sustainability of a Wikipedia city? Good question! The easy answer is to hit a home run and have a bazillion engaged users. Jane Jacobs says that she isn’t talking about small towns, but only about large cities. Can you have a vibrant, self-sustaining “small town” online? For Jacobs the key is density, mixed use, walkable streets. It’s easily said, but if your cybercommunity can have density, mixed use, and walkable streets, that’s a pretty great start. And the least regulation possible. Open a shop in the middle of a residential area? Yes! Use a pseudonym on a social network? Yes!