On Wednesday I argued that in the past Killer Apps were software that made hardware “must have,” like Lotus 1-2-3 for the IBM PC, but that today “Killer Apps” are users that make platforms must have, like Bree Olson for Periscope. One big difference in this paradigm is that Lotus 1-2-3 didn’t only put the IBM PC on the map, it also made a fortune for Lotus Software. Compelling ‘scopers like Bree Olson may be putting Periscope on the map, but as far as I know, Periscope does’t pay them a penny for all that value.

Will Periscope be writing Olson and her extensive ensemble cast a check for that? Should they?

Unlike matter and energy which cannot be created or destroyed, money is created all the time. IDK what the exact value of Olson’s 23 million hearts should be, but I’m positive that they represent real value. Real money. And Periscope should pay her!

Because Kayvon Beykpour and Joe Bernstein sold Periscope to Twitter before the public launch of the app, they were only paid a “paltry” USD 100 million for it. If they’d been in a position to wait longer, they might have seen a much higher payday. In 2012 Facebook bought Instagram for about US$1 billion. Facebook unsuccessfully tried to buy Snapchat for US$3 billion in 2013, and in 2014 Facebook bought WhatsApp for US$19 billion. At the time that Facebook paid US$ 1 B for Instagram, it had just 13 employees. So what exactly was Facebook spending US$1 billion to acquire? The services of the 13 most genius human beings in the history of life on earth? The code base? Whatever IP they had? I doubt it. 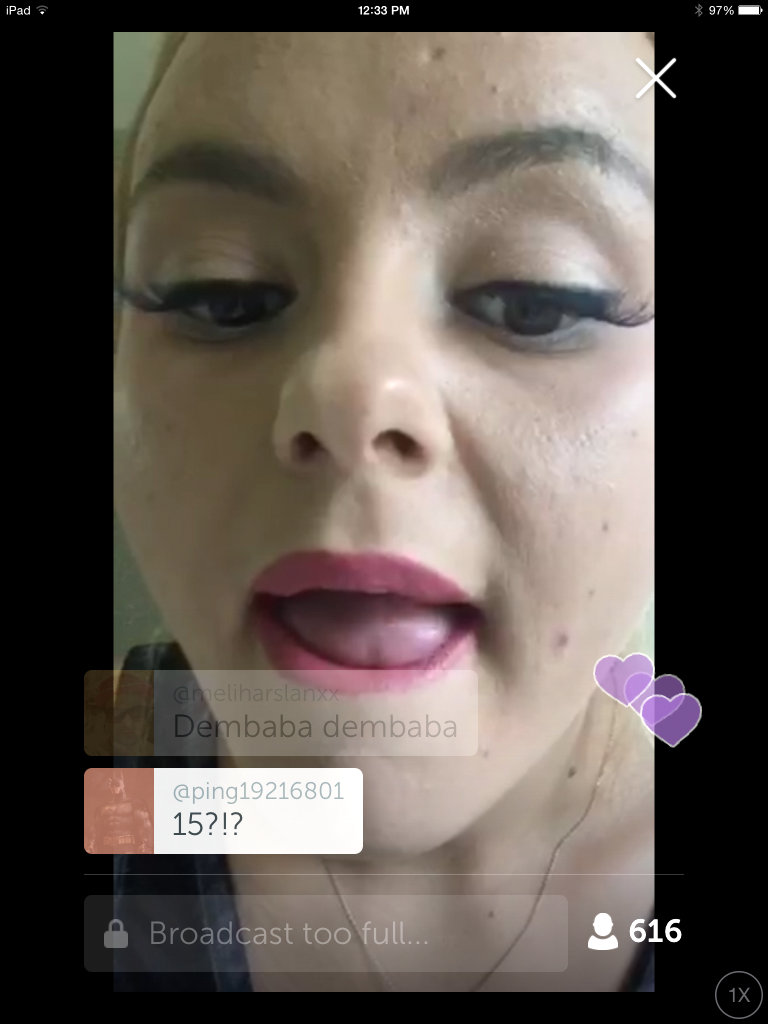 Without compelling broadcasters like Olson, 10’s of thousands of viewers, and a platform to unite them, there is no new media economy. Let’s be clear that money and value are created all the time. It is not the case that if Olson had never come to Periscope, those 23,606,123 hearts would have simply gone to some other Periscoper. Some might. Many other hearts would never have been created. In the San Francisco Gold Rush, new money and value were found in streams. Today people mine Bitcoin. And when a broadcaster like Olson and an audience like her “Breeops” are united via a platform like Periscope, new money and value, about 23,606,123 hearts worth of it, are created. Olson and her Breeops are at least as important, I would argue far more important, than the platform. They should not be working for nothing. Sure Olson seems to be having fun when she dances, or receiving therapy when she talks about life issues, but she’s also working her ass off. And it takes a hell of a lot of tapping to generate 23,606,123 hearts! So what if Olson and her viewers like their jobs! Isn’t that the dream of our age, to enjoy your work? Just because you like your job doesn’t mean you shouldn’t be paid for it.

In an Olson Periscope-interview with her former agent, Chris Cain of Foxxx Modeling, we learned that his fee for being her agent was 10%. But being a Talent Agent doesn’t scale the way being a Mobile Platform does. IDK how many users Periscope has today, but it had 1 million after just 10 days. By contrast, the Foxxx Modeling website suggests that Cain must earn his livelihood by working for just 33 models. So Periscope probably deserves a lot less than Cain’s 10%. Maybe even 1% is too much. But let’s be generous and give Periscope Cain’s 10% anyway. While Olson’s charisma and the contributions of her large ensemble cast are huge, the audience is an equal partner in generating hearts, or wealth, so let’s have OlsonCo and Breeops each split the remaining 90% of the value of Olson’s 23,606,123 hearts.

It’s important to appreciate that Periscope Hearts translate directly to money. Followers on Periscope, Twitter, or anywhere else do not. Katy Perry is #1 on Twitter with 72,266,583 followers. But she’s only tweeted 6,539 times in the last 6-1/2 years. Justin Bieber is #2 with 65,143,582 followers, but in those same 6-1/2 years (Perry got her Twitter account in Feb ’09 and Bieber got his a month later) Bieber’s Tweeted 28,700 times. It’s difficult to understand what the actual value of a “Follower” on Twitter, or Periscope, or anywhere else is. How often do you Tweet? How many of your followers actually see it? Perhaps a follower is not “value” at all, but the potential to create value. By contrast, a Periscope Heart is value. It’s money. Or should be. When Olson broadcasts and viewers heart, they work together to create value. You can’t create “heart money” simply by following Katy Perry. You can only create hearts and whatever their value might be if someone like Olson is broadcasting and fans find it compelling enough to tap for hearts. As a facilitating platform Periscope might deserve 10% of that new money, but to take all of it is theft. It is immoral, and it should be illegal.

By now we all know that Facebook makes a fortune by packaging and selling us. If you’ve seen the old To Serve Man episode of The Twilight Zone, you might have thought the people “Serving Man” were aliens. But in reality they are Mark Zuckerberg and his peers. For years Facebook has gotten by with the mantra “if you don’t like our terms you don’t have to use our service.”

In the most ironic and cyincal case I’ve ever heard of, the “honesty in academic paper writing” service Turnitin makes it’s money by stealing content from students! Amazing but true: every student who is coerced to submit their work to Turnitin for verification also becomes an unwilling and unpaid employee generating wealth for Turnitin. The judge that found in favor of Turnitin adopted an even more cynical variation of Facebook’s mantra noting that if the students didn’t want to perform unpaid labor for Turnitin, they didn’t have to attend the school – they had the choice to be home schooled instead! 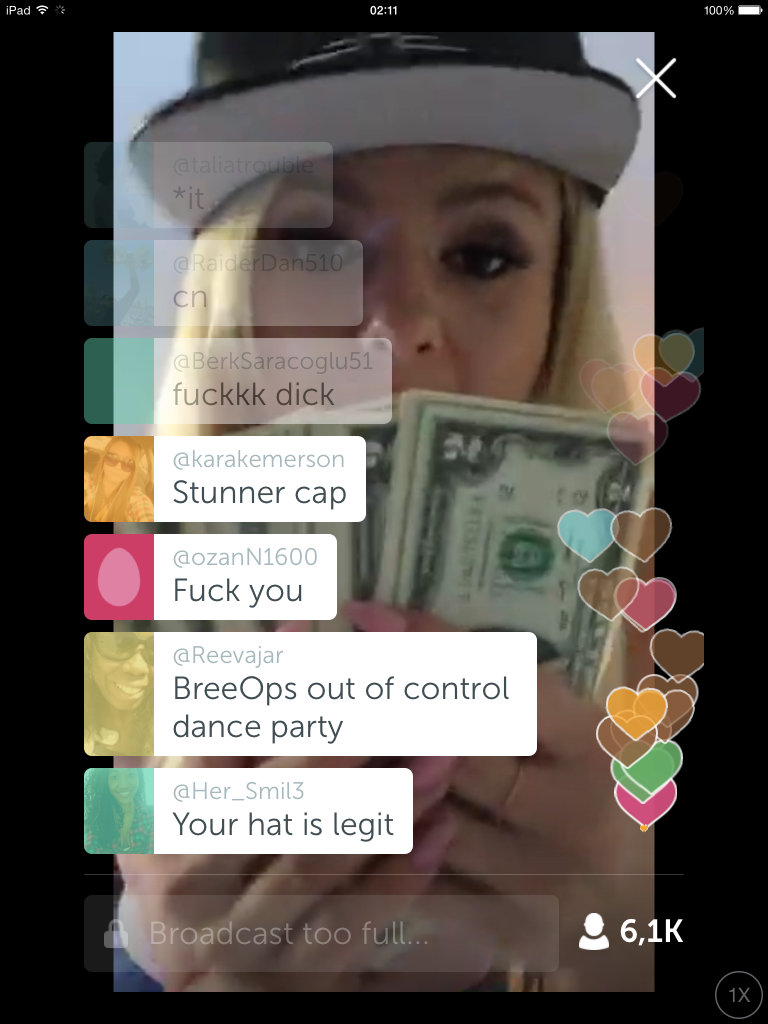 It’s hard to know what the market capitalization of a wholly owned subsidiary like Periscope would be, but I’m going to imagine it’s more than the US$100 million paid earlier this year. Should Hearts be worth US 1 cent? Who knows. Let’s do the math for 1/2 cent (USD .005 per heart)

So far Periscope has created staggering wealth for a tiny number of people. It’s selling new phones and bigger, and crazy-expensive data plans. Everybody is winning. Except the people who are actually doing the work. It’s time to fix the system.

I’ve written this post for 2 reasons: first as a follow-on to Wednesday’s Bree Olson, Killer App post. But also because I started reading Jaron Lanier’s 2013 book Who Owns the Future? today. As someone who’s been a rabid Free Culture proselytizer for the past 8 years, even the first few pages are already rocking the world I thought I knew. I don’t know where this rabbit hole will take me, but I’m turning pages as fast as I can.

What I do know is that whether or not you advocate Free Culture, Facebook, Instagram, Periscope, and so many other platforms are playing a winner-take-all game with our creativity. I honestly don’t know what sort of culture I’ll be advocating by the time I finish the book. Stay tuned! 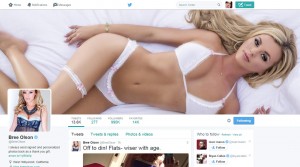