Scripting genius Soto Hax, aka “Mizz Hax” has scripted the Treadmills at Izzy’s Gym so they can report your activity to your WordPress blog!

Your Chair is Killing You

Since 2011 I’ve had both RL & VR treadmills. It all started when I saw a video of a talk by a guy I’ve never even met: Ernesto Ramirez‘ Your Chair is Killing You at Ignite San Diego:

After seeing Earnesto’s compelling talk I did a bit of research and learned two things:
1. Most people didn’t know about the dangers of sitting, or about treadmill desks
2. If you surf a bit, there’s all kinds of info on both

So I built an RL treadmill desk. And then I modeled it in VR so “we” could both walk and work at the same time. 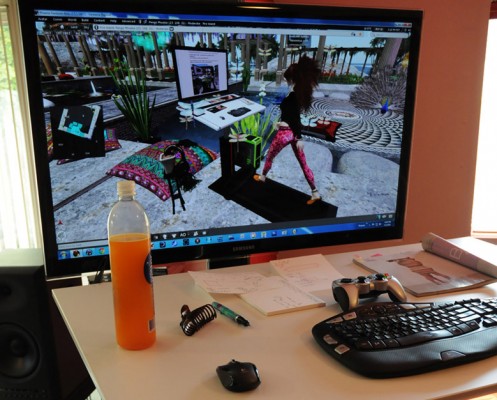 And then in January of this year Isabella Medici opened Izzy’s Gym a VR Treadmill Desk gym where avatars can get the exercise they need and still work on their blogs and other projects. She challenged us to walk 10.2 miles with Lawrence Lessig and the New Hampshire Rebellion.

Merriam Galaxy and I signed up to walk the 2014 NH Rebellion, and on walking day about a dozen more avatars joined us. I walked the same 10.2 miles in RL & VR. And we finished the walk in the same 5-1/4 hours that Lessig and the other walkers did. In RL I had a Fitbit activity tracker to measure my steps and distance. But in VR we just had to fake it. Until this week!

AVtrak Avatar Treadmill Demo from Vanessa Blaylock on Vimeo. Soundtrack is Quantified by The Law, feat. vocals by Asteria.

Thanks to Soto Hax’s cool scripts, when we again join Lawrence Lessig & The New Hampshire Rebellion in their January 2015 walk, our new AVtrak Treadmills will track our walking and send all of our walking to a leaderboard on this website!

The story of how Soto Hax wound up writing her awesome scripts is a tale of virtual serendipity. In January 2014 I decided to do a project called 365 Dancers wherein I would do a portrait of someone dancing in VR every day of 2014. I came up slightly short of 365 days, but I did manage to publish a dancer portrait every day in a row, all the way till.. January 16!

Fortunately in my brief project, Dancer #5 was RMarie Beedit, who quickly became one of my best friends and VR Exploring pals.

Soto saw the treadmills this week and we got to talking and BAM!!! She wrote a little LSL script to put in the treadmills, and a companion WP plugin in PHP to install on your WordPress. It was her first WP plugin ever. I think she got it running, start to actually working, in 2 or 3 hours!

Hopefully Soto’s plugin will eventually be in the WP Plugin Repository, and also on GitHub, but for now you can get all the parts from her website. And I’ve put the treadmill on SL Marketplace for free. You can use the treadmill without sending the data if you like, or you can wire it up and track your activity.

If not before, I hope you’ll join us in mid-January when we join Lawrence Lessig and the New Hampshire Rebellion in the 2015 walk. The walk is in the memory of Granny D and Aaron Swartz, and it’s a fight to end the corrupting effects of money in American governance.

Soto’s modified the plugin so it now is a leaderboard, showing who’s walked the furthest at the top. I wonder what it’d take to get some cool dashboard graphic displays like the Fitibit dashboard? And avatar photos next to how far they walked? And maybe a wearable AVtrak that doesn’t need a treadmill and can measure how far you walk. And, and, and!!! Oh how the wish list of the mind grows!

Many avatars, like me, can spend a lot of hours online! These avatars are my friends. I’d like to see them live long and prosperous lives, not drop dead from the harmful effects of sitting. A standing desk is nice in that it gets you out of that chair, and personally I like standing a lot. But standing is actually a lot more fatiguing than walking at an easy 1-2 miles or 3-5 km / hour. At these slow rates you can wear business attire without sweating, and you can talk on the phone without being out of breath.

You can buy a high end treadmill desk that is as amazing as it is expensive from a company like Steelcase. If you already have a treadmill, you can save 90% of the Steelcase price by getting something like a TrekDesk. Or you could save 90% of the TrekDesk price (99% off the Steelcase price) by simply strapping your laptop to a SurfShelf on your treadmill. You could also slide an inexpensive treadmill from Amazon or eBay under your drafting table like I did.

Do you think you can setup a treadmill desk at home or office for 2015?