Desu’s been modeling in Blender and she showed me a low poly tree she imported to SL. It’s so cool! 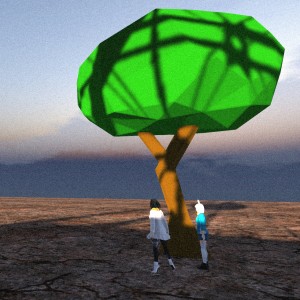 We’re currently waiting to hear if our Pedestrian Access proposal is “funded” by the LEA AIR Land Grant Committee. If it is, we may be able to put Desu to work! 🙂 I’m sure Izzy would love to use the trees at Medici University, and perhaps Trilby’s Mill or one of the other installations can use them as well. I wonder if Desu’s created any wind turbines or solar panels? Dorm Rooms maybe?

Low Poly is really playful. Ze Moo has a theory about The Glitch. He thinks we need to embrace it to be happy. I’d say the glitch is the bit of random chaos that new ideas spring from. I think Low Poly has some of that liassez faire freedom and playfulness that the glitch can have. High Poly sure is pretty. But kind of like Ze’s point about Glitches and never obtaining perfection, how high poly is high poly enough? With High Poly you’re trying to pretend that VR is RL and perhaps you’re never satisfied. With Low Poly you’re embracing the idea that we live in a cartoon world!

Can Plastic be Honest? 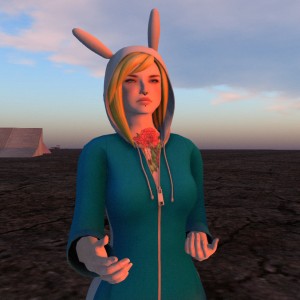 Speaking of “poly,” that reminds me of Polyester and the idea that Plastic is at its worst when it tries to deny what it is, like a Polyester Leisure Suit, and at it’s best when it embraces what it is, like a vinyl miniskirt & go-go boots. Perhaps polygons too can find power in embracing what they are, rather than trying to be something else.

High Poly also has a sort of Uncanny Valley problem. In the sandbox where Desu rezzed her low poly tree for me, there in the distance is an amazing, beautiful, high poly tree. It was hard to photograph that tree because of the way it was nested inside that pyramid, but believe me, it was a crazy, high detailed, glorious tree with flexi bits swaying gently in the virtual breeze. 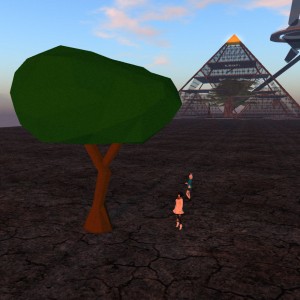 Uncanny Valley refers to the human form, but I wonder if there isn’t something a bit like it with other experiences? That high poly tree is vastly “better” than Desu’s tree. But for all it’s “perfection,” it isn’t a tree I can climb too high in and suddenly be paralyzed by the fear of falling and breaking bones. It isn’t a tree that emits a sweet fragrance in the springtime. It isn’t a tree with an annoying army of ants marching through every romantic picnic near it. It is a tree so almost real that perhaps it highlights the ways in which it is not real. By contrast, like a vinyl miniskirt, Desu’s low poly tree doesn’t care about not being organic or having no aesthetic pedigree, it’s just a fun tree that understands its place in the world. Like an avatar who’s been banned from Facebook, Desu’s low poly tree realizes it’s hopeless to try to take yourself too seriously.

You just do what you do and leave it alone.

Hell, people never learn, Bobby. Just ’cause you’re doin’ somethin’, don’t mean that’s what you are. You just do what you do and leave it alone.

— Super Joe Weller, The Trip Back Down, by John Bishop

Can you get behind a low poly tree? Or does it break the immersion for you? Is it honest like a vinyl miniskirt? Or fake like a polyester leisure suit?

Does a low poly tree mean that you live a low poly life? Or do you just do what you do and leave it alone? 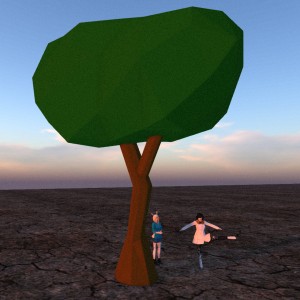