killer app, noun, a computer application of such great value or popularity that it assures the success of the technology with which it is associated; broadly : a feature or component that in itself makes something worth having or using. — Merriam Webster

19 years after Jennifer Ringley became the killer app for the webcam, Bree Olson is the killer app for Periscope. Olson isn’t the Periscoper with the most “hearts” – yet – but considering it only took about 3 days to go from 14 million to 20 million, who knows how far the sky goes for her. 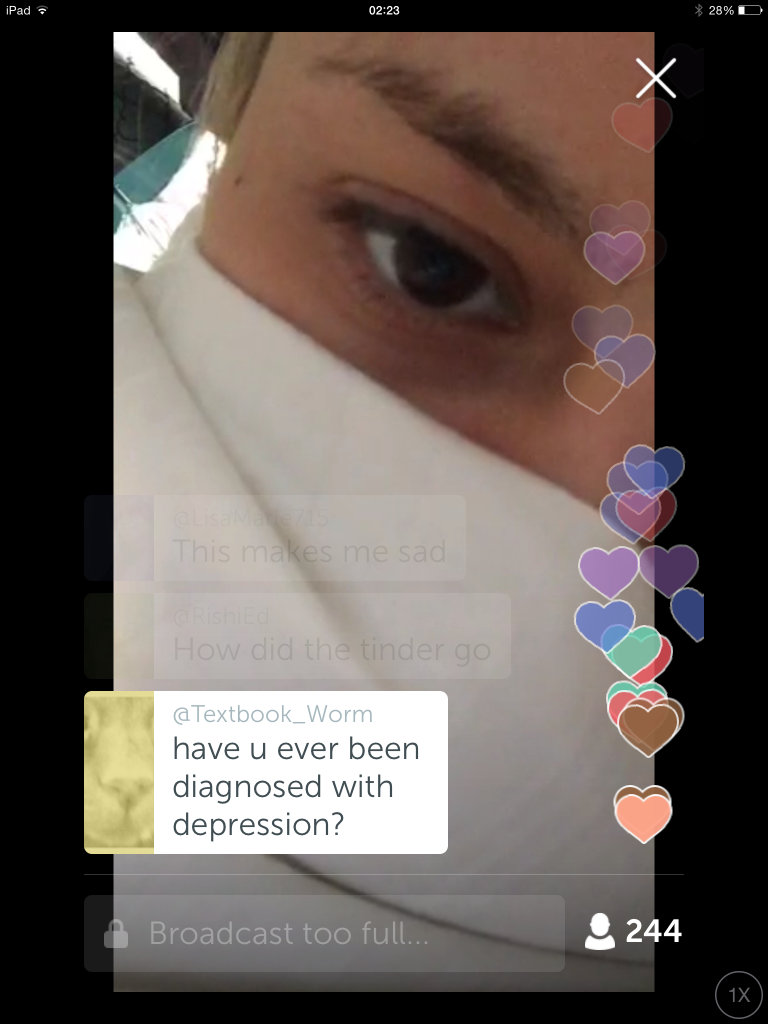 After a 7-hour marathon broadcast of doing makeup, bedroom karaoke, and taking her “Breeops” audience with her to coffee, and hidden in her purse to the drug store (a bit like Paris Hilton’s chihuahua) she’s actually leaving her Breeops behind to go on a Tinder date by herself.

Will there be Periscope updates from the bathroom? Time will tell. Rest assured there will be a debriefing for her Breeops whenever the date ends.

Actually turning Periscope off for this date is dramatic. When she gloriously, if briefly, reunited with former girlfriend Torri, only 2 “conversations” were with Periscope off, the rest of their time together was live before her ominpresent audience.

Since we’re in radio silence ATM, in the eye of the hurricane, the shadow of total eclipse, it’s a good hour to pause and think about how, in a couple of weeks or so, Bree Olson has become the Killer App of Periscope.

A Brief History of Bree Olson

Given Olson’s past decade of media activity, it seems fair to say that she loves the camera and the camera loves her. Far less obvious was that she possessed the charisma, the conversational dynamism, and the sheer stamina, to broadcast for hours a day, every day, to an audience ranging from hundreds to thousands.

Are Olson’s Periscopes more compelling than The Truman Show? Or Keeping Up with The Kardashians? Or just as banal? Are Olson’s long, carnivalesque hours of broadcast truly spontaneous and unscripted? Do her many “co-stars” really Periscope, Skype, Text, and knock on the door at such opportune times? 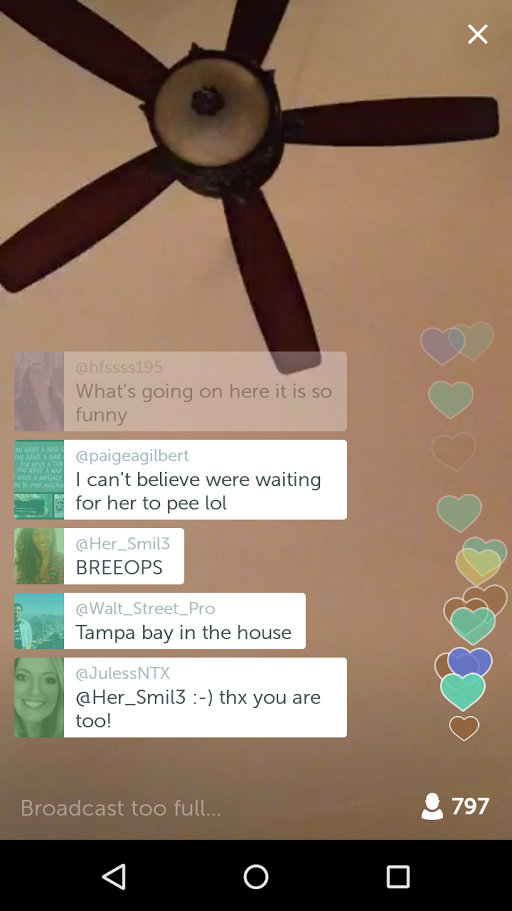 Down the Rabbit Hole

The Matrix (1999) was a truly great film. Insightful as it was, it did get something fundamentally wrong. In the narrative, our heroes, Neo, Trinity & Morpheus, are working desperately to get out of The Matrix. But IRL we’re building “The Matrix” as fast as we possibly can, and pushing and shoving and cueing up around the Apple Store for hours to be the first ones to get in.

The Truman Show (1998) was also brilliant and visionary. It did depict an audience that was deeply engaged with the machinations of Truman’s life. But the film didn’t anticipate the interactivity of the social web and mobile devices. In The Bree Show, “Breeops” get to tell her, and each other, what their reaction is to each moment of her existence. Unless, that is, they type the verboten Open Boobs, in which case it’s Holy Blockamole, “No Bree Show for you!”

Viewers have seen Olson made up to Western beauty perfection, and also broken out with acne and after a chemical peel. She’s ‘scoped during hours of makeup letting us see the transition. Other than nudity, there’s nothing left out of her nearly 24/7 Periscope broadcasts. She seems to celebrate Western beauty ideals, even as she critiques and dismantles them.

For Life Sharing we turned our private lives into a public artwork. We made each and every file on our computer, from texts and photos to bank statements and emails, available to anyone at any time through our website. Unlike social networks, which didn’t exist at the time, its focus was sharing. Anything on our computer was available to search, read and freely copy, including the system itself, since we were using only free software. Private emails published in real time. To extend the idea of exposing ourselves through the internet we started wearing a GPS transmitter so that anyone could know exactly where we were at any given time. We were obsessed with traffic logs, waking up in the middle of the night to check how many people were viewing Life Sharing. Where did they come from? What were they watching? For how long?

2 years after the launch of Blippy, Jeff Jarvis celebrated openness, tools like Blippy, and his own courage in blogging his prostate cancer with his 2011 book Public Parts

A year after Jarvis’ book, and 30 years after he started wearing a “Google Glass”-like device, Steve Mann walked into a McDonalds in Paris (1 July 2012) and was assaulted by employees. 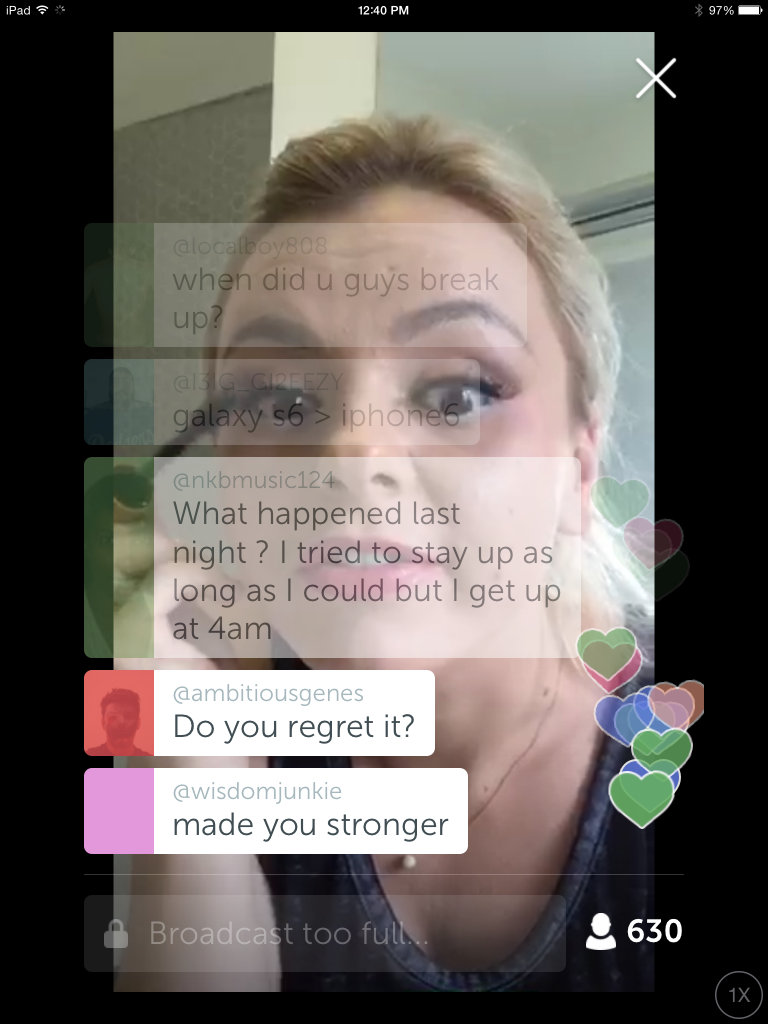 In 2014 Kayvon Beykpour & Joe Bernstein started working on Periscope. Twitter bought Periscope in March 2015 for USD 100 million, and launched Periscope on iOS later that month. In May 2015 Periscope launched on Android, and of course, in June ’15, Bree Olson started ‘scoping.

Periscope is hardly the first video streaming, or mobile video streaming app. Justin.TV was launched in 2007, spun off Twitch.tv in 2011, and was replaced by Twitch in 2014. Ustream was also launched in 2007. These and many other platforms have ushered in ubiquitous video streaming. Many of these platforms feature sidebars with chat windows. Short mobile apps, like Tout’s 15-second videos, or Keek’s 30-second videos seem ripe for interaction and response. In text IM I’ve always thought asynchronicity was an advantage. But I’m not so sure for mobile video. Sending volleys between Tout users across the day doesn’t seem as compelling as the immediacy of Periscope. And while platforms like Twitch or Ustream offer live chat, it’s in a texty sidebar.

Periscope’s simple but powerful use of fading chat boxes scrolling superimposed over the left side of the video image as “hearts” scroll over the right side is a brilliant piece of immersive design. Periscope walks the tightrope between old media’s one-2-many paradigm and new media’s many-2-many paradigm with deft balance. Periscope lets a charismatic broadcaster like Olson shine without too much distraction from the audience, even as it makes the audience an integral part of the experience. For the audience it’s massive engagement without the pressure of having to be on-camera. Moving the boring chat from the sidebar to an engaged space integrated with the video stream is as on fleek as Olson’s eyebrows.

Once upon a time The Internet was the home of nerds. A place where introverts could shine. For a long time now everyone has been online. I don’t know that many of us introverts could hold an audience the way Olson does. I’m not even sure how many 90210 extroverts could. Olson’s moment here on Periscope is the intersection of her own 10-year media odyssey, and the technology, platform, and infrastructure developments in streaming and mobile video.

One exciting thing about Olson and the other stars of Periscope is that they’re not the usual stars of so many other platforms. If you look at the Top 100 on a platform like Twitter you’ll notice that it’s almost entirely dominated by global music superstars. Katy Perry #1. A rare non-musician like Barack Obama sandwiched in-between Justin Bieber and Taylor Swift. Bieber happens to tweet a lot. Perry and Swift not so much. But the reality is Katy Perry would have a large portion of her current 72 million Twitter followers even if she never tweeted. She’s got a lot of fans and they’re going to follow her.

Followers on Periscope could work the same way. But hearts on Periscope can’t. No matter how huge Katy Perry might be in the music & media world, she can’t get Olson’s 20 million hearts just for being famous. She’d have to actually be present. This, along with its newness, explains why all the top Periscopers are more “mere mortals” than Perry & Bieber et al. Having reached 20 million earlier today, Olson is poised to break into the Periscope Top 10. 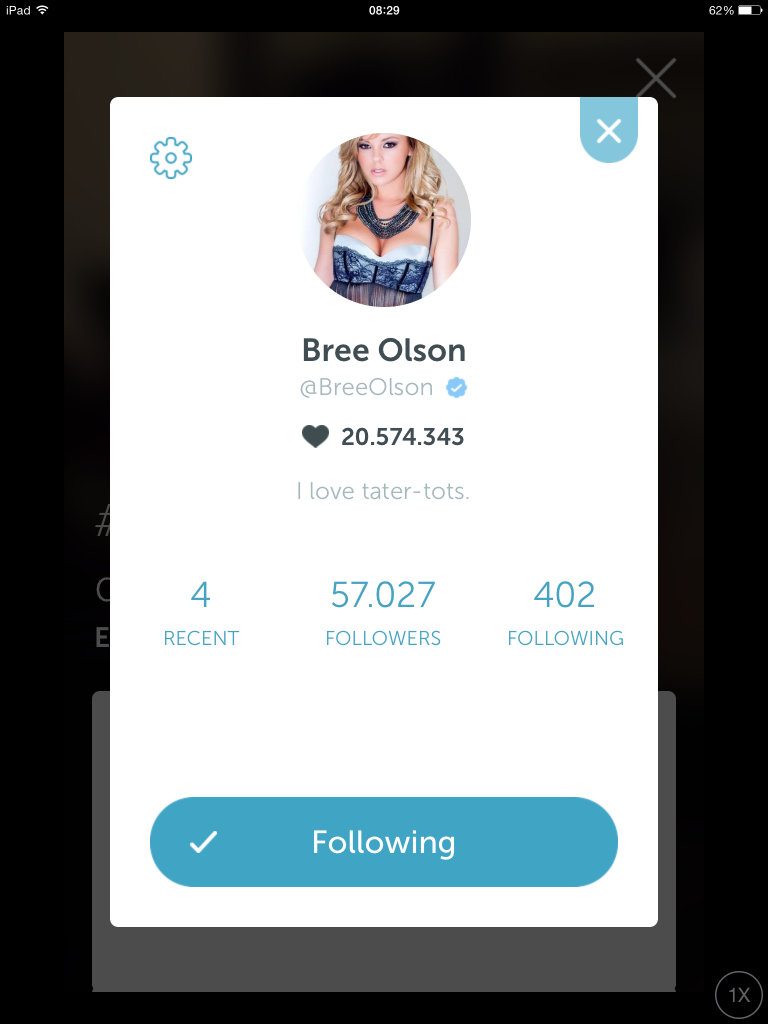 It’s a little bit crazy to think about how much work Transmedia producers do to coordinate Tweets and YouTubes and Websites and Texts and so much social media in an effort to create rich, complex, new media story worlds. The results are often impressive, but the 24/7 labor to keep so much complexity going is staggering. Who knew all you had to do was give Bree Olson a few iPhones and an unlimited data plan?

60 years ago, Vivian Vance’ (Ethel Mertz) job on the I Love Lucy show was to never be more beautiful, nor more funny, than the show’s star, Lucille Ball (Lucy Ricardo). Media’s always worked that way. If you outshine the star, you’re gone. Just ask Pete Best about that.

But Periscope is different. It’s less Ethel trying not to outshine Lucy, and more Bobby Donnell & Ally McBeal doing guest appearances on each other’s shows. Olson’s fond of pointing her Periscope mobile device at one or more other mobile devices and sharing her Tinder swiping, or other people’s Periscopes, or multiple Skypes, with her Breeops audience. Neither Olson nor the Breeops do any hand-wringing about how curiously meta this all is, it’s just normal life in a mobile world. And anyway, is there anyone alive in the Global North who only has one mobile device these days?

Bree Olson’s Periscope moment is the intersection of her own 10-year media journey and the evolution of streaming and mobile. But perfect storm as it all is, it’s ultimately about Bree. I don’t know how you’d have guessed what a perfect fit Periscope would be for her from her previous 10-years of assorted media jobs. I don’t know how many others have the it that she does to engage so many for so long. Yes it’s soap opera. Yes it’s melodrama. Yes it’s banal. No, it’s not Sophie’s Choice or The Reader. But from The Truman Show to The Kardashians, from American Idol to Big Brother, has a “reality” platform and star ever engaged people the way Bree Olson does on Periscope?

Call it charisma or narcissism. Bree Olson’s got it. 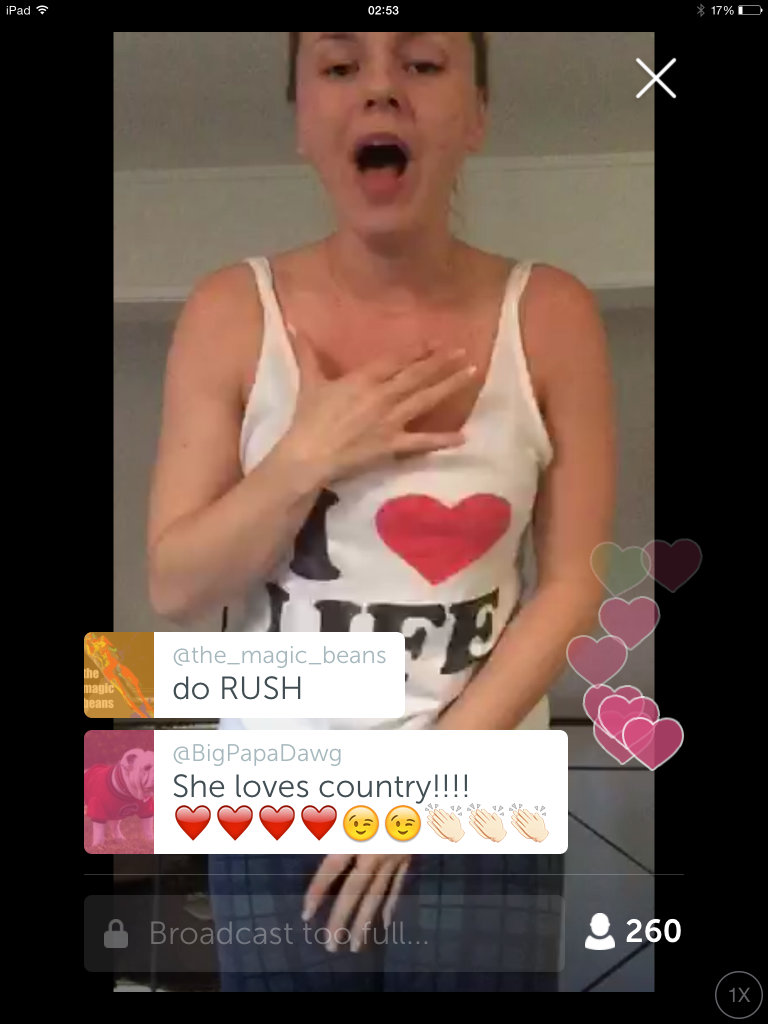 10:06pm SMT: After 4 hours & 8 minutes of silence, Olson is broadcasting on Periscope again. Tinder date recap. I’d like to write more about Olson’s exploration of new media and our evolving culture, but I’ve gotta go watch The Bree Show!